With over 30+ years of experience, AMPAC USA has been designing and manufacturing advanced Seawater Desalination Systems Watermakers for the on-shore and off-shore industries.

Onshore Fresh SWRO Watermakers, designed for land use, can be fed directly from the sea or any beach well and will convert seawater or salty brackish water to pure fresh drinking water.  These LandPro ™ systems are perfect for locations with no fresh or municipal water supplies such as remote areas, or smaller atolls and islands having no potable water sources.  SeaPro™ marine off-shore fresh watermakers convert seawater fed directly from the sea into drinking water quality and suit most boats, yachts, oceangoing industrial vessels and military ships. 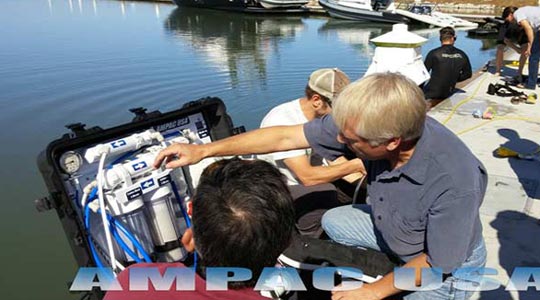 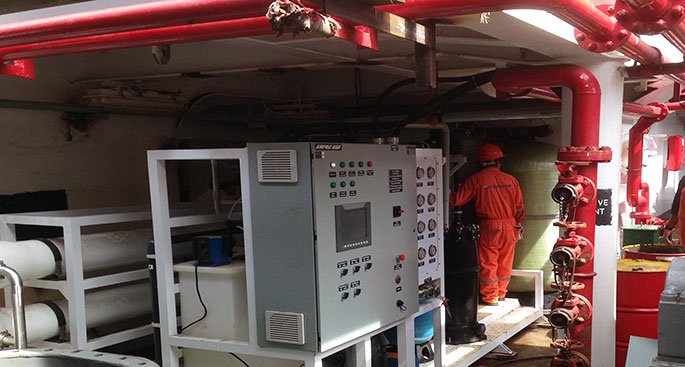 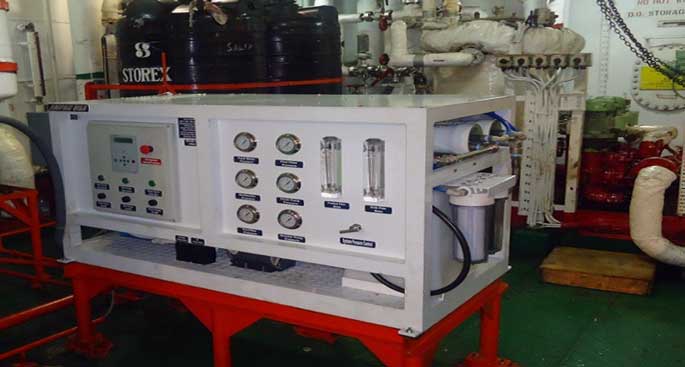 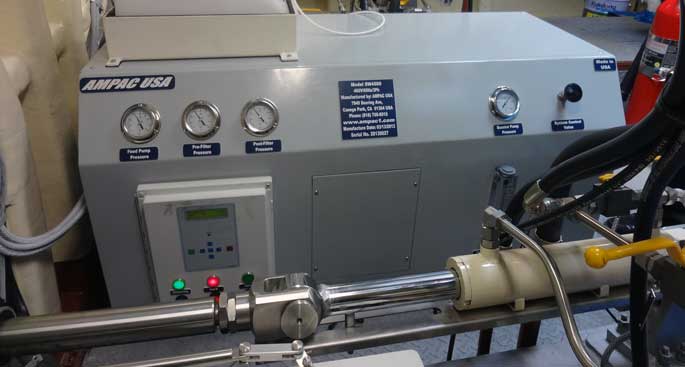 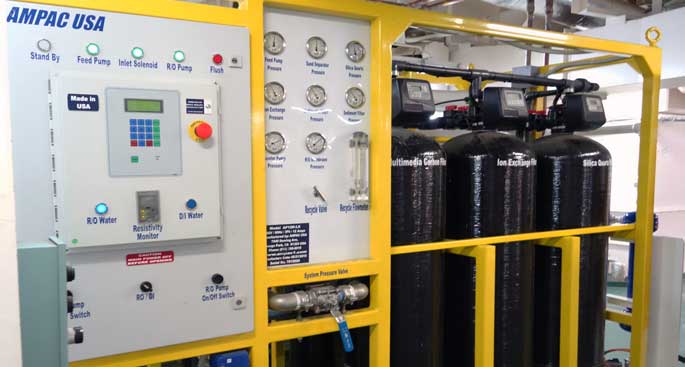 Seawater Desalination- An Ideal Solution in Many Situations

Water is a necessity for all humans, and yet we are careless about how we use this precious resource. It is a sad fact that more than 40% of people present on the planet have problems accessing potable water and the numbers of such people are growing at a scary pace. One of the many solutions that can help humans survive and thrive in the future is seawater desalination. Here we understand all aspects of this useful water treatment methodology.

Why We Need Seawater Desalination?

Desalination, also known as desalting of water consists of a water treatment process in which brackish water or seawater is converted to potable water. For those who are unaware, brackish water is a mixture of seawater and potable water, so it is less salty but often not fit for human consumption. After the water is converted via the seawater desalination process, it can be used for almost all human needs.

There are several processes involved in seawater desalination. Some or all of them are used in any system you come across. They are explained briefly over here.

Another advanced water treatment technology, it is a widely popular method to make water contamination-free. It has been used in more than half of the water treatment facilities across the globe.

The reverse osmosis process involves applying pressure to a saltwater solution to ensure that it is forced through a semi-permeable membrane that allows water to pass through easily but doesn’t allow dissolved solids to pass. The water passes through the membrane from a side where the salt concentration is higher to where the salt concentration is lower. As a result, the concentrated solution part is minimized.  This water treatment methodology depends largely on the external application of energy which leads to the formation of the pressure that is higher than the natural osmotic pressure of water. Solar energy can also be used in many cases.

In this process, water is heated to a point where it evaporates and then is condensed to obtain fresh water. This process involves many stages, and the temperature and pressure decrease in each stage until the desired result is achieved. The heat that is obtained from the condensation can also serve to distill water again.

In this process, seawater is pulverized in a refrigerated chamber at low pressure. It leads to the creation of ice crystals over the brine. It is separated to obtain freshwater.

In this process, water is introduced to a chamber in the form of fine droplets. The chamber is below saturation pressure. Some of the drops quickly convert into vapor, and it later condenses to form desalinated water. The water that doesn’t convert is passed to another chamber that has even lower pressure as compared to the previous chamber, and this chamber repeats the process until the desired results are achieved.

As this process is technologically difficult, it cannot be used on a large scale. But it is worthy of a mention. In this process, hydrocarbons are added to the saline solution to ensure the formation of complex crystalline hydrates that are separated at a later stage to obtain desalinated water.

Another unique process, it consists of a phenomenon by which an electric current passes through an ion solution. The cations or the positive ions migrate towards cathode or negative electrode and anions or negative ions migrate towards anode or positive electrode. The placement of semi-permeable membranes is done between both electrodes to ensure that Cl- or Na+ can pass through. In this process, the water that is contained in the center of the electrolytic cell is desalinated progressively and freshwater is obtained.

How a Seawater Desalination Plant Works

The workings of a giant or huge desalination plant are explained below. It would help you to get some idea of the processes.

This stage comes before the reverse osmosis process. In this stage, the seawater that will enter a desalination plant would flow through several screens that remove debris. Then the water would be subject to two water treatment processes, flocculation and coagulation. These are traditional water treatment processes that are still quite relevant. During these processes, first chemicals would be added to seawater to clump together various elements like algae, particles and other organic materials. This clumping would be useful during the sand filtration stage.

The reverse osmosis process is the most vital part of the seawater desalination process. In this process, the pressure is utilized to push water obtained from the pretreatment stage through semi-permeable membranes. It would ensure that freshwater passes through and seawater that has a double amount of salt and other minerals are left behind. The size of the RO membrane pore would be very small. It would be around .001 microns. It is about 1/100,000 diameter of human hair.

After the water is passed through the RO process, a few chemicals will be added to it to stabilize desalinated water. Then the water is blended with treated drinking water from other sources to ensure that the final water is up to the mark.

The water which was left after the RO process and was twice as salty as seawater would be blended with cooling water and discharged so that it blends with seawater as well. The blending process is essential because it provides more dilution and ensures that long term build-up of salinity can be prevented.

AMPAC USA - Meeting the WHO Standards for Drinking Water

If you need to buy a seawater desalination system or you want to invest in a seawater desalination plant, you need to ensure that you buy only from a reliable company like AMPAC USA that has a successful track record of not just meeting but exceeding client expectations. Every seawater desalination watermaker we provide would have all of the stages mentioned above. The pretreatment stage would be quite extensive and effective, the reverse osmosis process will separate seawater and freshwater, and the post-treatment processes will ensure that the smell, taste and color of the water are enhanced. The final steps ensure that water is free from microbes and bacteria. The end result will always meet the standards laid out by the World Health Organization (WHO) for Drinking Water.

Serving the Needs of the Military

One of the things that set AMPAC USA apart from other water treatment companies is that we don’t just design watermakers for residential, commercial or industrial use, we also design and manufacture heavy-duty military-grade Seawater Desalination Reverse Osmosis Water Purification Units, abbreviated as ROWPU’s which are fit for the use by Navy, Air Force, Marine and Army Corps of Engineers units across the globe.

The ROWPU’s, we design always pass the military-grade testing for reliability under harsh conditions and pass all the tests pertaining to water quality. They are also approved by NATO as a standard for provisioning freshwater from not just seawater but brackish water sources as well.  AMPAC USA ROWPU’s are also used for Military Sea Water Desalination, by NATO forces and have been installed on NATO vessels worldwide. Such ROWPU’s have a unique NATO stock number or NSN for military-grade applications.

These military-grade ROWPU’s we design have established a high standard in the Navy Seawater Desalination industry. They are created by integrating military and marine-grade components and materials which is clubbed with a craftsman’s extreme attention to detail.  The result is always a super-duty, very reliable, highly durable military-grade ROWPU watermaker which is trusted by the military community and Marine Industry across the globe. Many military units trust our systems for their Military Seawater Desalination and Military Spec Water Purification System needs.

Meeting the Needs of the Marine Industry

AMPAC USA is a leading designer, manufacturer and provider of top-notch marine watermakers that meet the needs of people who are associated with the marine life. Here are a few reasons why our customers trust us to meet the water needs of the marine industry.

When a person or a group of people are on the sea or the ocean, they need a watermaker that can last long due to a tough exterior. We create the exteriors by using high-quality stainless steel and strong aluminum which ensures that the products would last long even in extreme circumstances. The sturdy exterior is complemented by a great interior that has technologies like reverse osmosis and seawater desalination, which work efficiently to make water drinkable in no time.

We understand that the marine industry is always moving. So, if you need the seawater desalination watermaker delivered at a specific date like two days before your boat or ship sails, you can count on us to meet that deadline. We will process the order soon after receiving it and will ship it via the shortest possible shipping route. Even if we are designing a customized seawater desalination system for you, our design team will get started quickly and a project manager would work with design, manufacturing, quality, packaging, shipping teams and other departments to ensure that the products are always shipped quickly without any hiccups. As customized products need to go through many quality tests to prove their worth, the time needed to ship them would be higher than the time needed to ship products that are readily available.

The customer service team of AMPAC USA also makes the buying experience smoother. Our engineers would be eager to talk to you about your seawater desalination needs, visit the installation site if possible and recommend the best solution. They will always provide you with multiple options, and you can pick the one that suits your requirements and budget. As the engineers have a helping attitude, you can ask all the questions regarding the product, the water treatment processes, installation, operations and maintenance without hesitation. Even after product delivery, the customers are free to call us regarding training, installation assistance, or any issues they are facing with the product. We always value our customers and attend to their needs promptly.

When it comes to seawater desalination, the expertise of AMPAC USA is hard to match. We have been delivering quality seawater desalination systems for decades now and we have deployed watermakers everywhere, be it small vessels that need space-savvy systems to large ships that have bulk water needs. Some of our products are even on the rigs in the Arctic ocean, which proves our reliability and trustworthiness. Another thing that adds a feather to our cap is that we can design systems that purify water from any seawater source and ensure that it’s tasteless, odorless and colorless.

It must also be mentioned here that AMPAC USA Offshore Seawater Desalination Watermakers can be configured to explosion-proof Class 1 Div. 1 & Class 1 Div. 2 standards, reinforcing their renowned performance and reliability with maximum protection from potentially catastrophic events. To know more about any of our seawater desalination systems, Call 909-548-4900 now!